Last weekend saw the 60th anniversary of the Eurovision Song Contest, and Sweden crowned this year's champion (again). It's not the only major event to have taken place across Europe recently as Project Manager Annelies Stalpaert, and Eurodesk co-ordinator Kylie Morris, give us an insight to their highlights of European Youth Week events.

For me, European Youth Week began at 5.30am on a December morning in 2014. I was flying to Brussels for my first briefing meeting as a national coordinator, where colleagues at the European Commission would be telling us about the plans for the week. I came back from the meeting with a better idea of what European Youth Week is all about (don’t be fooled into thinking the title gives it all away). So what did I find out at the meeting? European Youth Week is a dedicated week of activities where countries all over Europe host events and campaigns to raise awareness of opportunities available to young people.  Initiatives such as Structured Dialogue, and the introduction of Ideas Labs were high priorities, but the broad idea is to reach out to young people and try to build interest around mobility in Europe. I was excited to be involved from the start, but I’ll admit I felt a bit overwhelmed!

It's relevant in the UK

With support from Erasmus+ UK National Agency colleagues, we created a series of short films that reflected the aims of European Youth Week, and sent project representatives to Brussels to take part in the European Commission’s festivities. The films we produced were the flagship of the UK campaign, and featured three speakers who had taken part in a mobility opportunity in Europe.  The brief was to present these opportunities as a positive experience and with funding available through Erasmus+, try and inform young people that anyone can take part. Luckily for me, I didn’t need to direct my speakers too much! The half-day spent filming with three people who had travelled to Europe on a mobility opportunity was certainly my highlight from the project.  Getting to speak to young people who spoke so positively about their experience, and hearing their perspective on the benefits and challenges the opportunity gave them was an inspirational way to spend four hours! I hope you enjoy watching them!

Annelies Stalpaert, (left top image) originally from Brussels, now working as a Project Manager in the Erasmus+ youth team shares some of the European Youth Week events which took place in her home city.

How to have your say 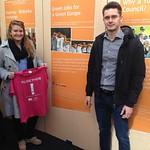 A High Level Debate brought together EU representatives, youth experts and young people to discuss the barriers young people face in society and how they can make their voices heard. During the debate three ‘local heroes,’ (young people who reach out to their own communities and make a difference on the ground), inspired the audience with their experiences during a youth exchange, and how they used their entrepreneurial skills to set up a start-up company.

Time to hand out some prizes! 35 Youth in Action projects from different countries were shortlisted to receive one of the three prestigious Youth Awards. The UK nominee was Together England, represented by Eva Peterkova and Daniel Markovski (pictured) from the project Green Jobs for a Green Europe.

Want to stand alongside the Youth Awards winners with a certificate or even prize in hand? You can do this by getting involved in one of the youth funded activities in the Erasmus+ programme! You can find more information about mobility projects for young people, partnership activities as well as meetings between young people and policy makers on our website.

Kylie explained, “Now that European Youth Week is almost over for 2015, of course I’ll be thinking about what to do next year.  I feel like the films we made demonstrate the essence of what European Youth Week is all about, so in 2016 I hope I can build on this message and perhaps create something that includes more young people and celebrate what’s great about youth mobility in Europe.”

Do you already have a success story you would like to share with us? Get in touch by emailing us or tweeting us @erasmusplusuk