City of Cardiff Council has been running projects through Erasmus+ and its predecessor programme for over eight years.

During this time it has been awarded over 3.3 million Euro in Erasmus+ funding, helping to raise standards in Welsh schools and improve global understanding amongst its participants.

City of Cardiff Council, in its goal to support its leaders, teachers and the wider school community in schools across Wales, has carried out a diverse range of Erasmus+ projects. These projects have impacted directly on teaching and learning - developing skills amongst its pupils, school staff and communities.  They have also helped to raise standards in schools across the country and enabled City of Cardiff Council to support schools in meeting their national and international priorities.

Emily Daly, International School Linking Officer for City of Cardiff Council, has led on all of these projects and estimates that they have run over 20, first with Comenius, a schools predecessor programme, and then through Erasmus+. For the five Erasmus+ Key Action 1 projects it has run, as the Consortium lead, City of Cardiff Council received funding to support over 300 teachers in mobility and continuous professional development (CPD) opportunities. Its six Erasmus+ Key Action 2 strategic partnership projects have typically involved around three schools and focused heavily on pupil participation. As a result, over 200 teachers and their pupils have been positively impacted, with the wider schools, partner schools and their combined staff, families and communities also benefiting from the many and varied activities.

Projects have covered a broad range of topics, from gender equality to literacy in home languages. Many projects focus on CPD, on issues such as additional learning needs education, parental education and inclusion. And the story continues for City of Cardiff Council as it has just received Erasmus+ funding to run a further four projects looking at a new range of demanding and diverse topics, from robotics to wellbeing in schools.

Thanks to Erasmus+ we are bringing together schools, teachers, young people and wider communities to learn from each other and develop a more global outlook.

With such a large number of projects and people involved, it was hard to select a few examples of successful projects, but these more recent ones stand out for Emily:

This project, completed last year, impacted greatly on the wider communities in all the participating schools. In each case parents are now regular visitors to the schools, participating in learning of their own, supporting pupils and other parents in their learning and generally engaging with school activities. You can find out more about this project in a short film made by the schools. 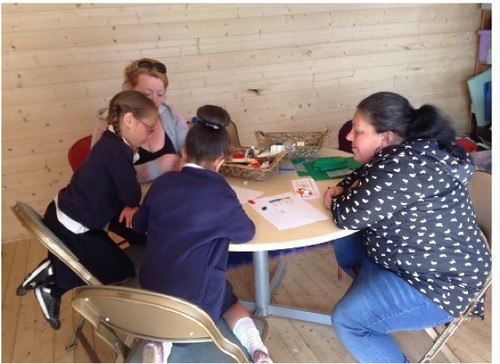 Learning and Teaching Together

This pupil-led community project is having real impact on the wider school community.  In 2017 two of the participating schools took primary pupils to attend a pupil conference in Spain.  Many of the children had not travelled abroad and in order to be chosen as representatives they needed to go through rigorous interview processes, including, in one case, going to an interview in Cardiff City Hall. The skills the children are learning on the project are significantly impacting on standards already and the community projects in which they are engaged are bringing parents and the community into the schools.

In 2016 21 head-teachers and senior leaders took part in a study visit to Finland, the first in this two-year project.  As a result, many of the schools have adopted techniques learned in Finland, such as standing desks and exercise balls in place of some chairs, and the impact is clearly visible. The leaders have embraced the learning and a large number of presentations have taken place to other school-leaders, teachers, council leads and the Welsh Government.  Emily is particularly excited and encouraged by the impact of this project overall out of which they have established ‘ELAN’ (European Local Authority Network) which brings together local authority representatives to form formal and informal links. Members are currently from 10 member states and from 15 different regions.

And one older project that stands out from the Erasmus+ predecessor schools programme is Greenway Primary:

This primary school based in Cardiff has a long history of welcoming gypsy traveller families into education, with up to 30% of the school population from this community. Working with a region in Spain to share work and learning was invaluable. Greenway focused on creative projects and physical exercise, knowing that these were areas that this community enjoys. Traveller children led sessions in class on their culture so that whole school understanding was developed and myths dispelled. 60 children gained qualifications in first aid and conflict management. Their attendance improved year on year since 2011, placing them above the local authority average in 2015/16 academic year at 95.7%. This is an increase of 10% in five years. Attainment and achievement also improved within this group. This year 75% of the gypsy traveller children will achieve Core Subject Indicator of L4+ and 80% Foundation Phase Indicator O5+. The traveller community has increased its attendance at all school events from about 50% to 80%.

“We are delighted that growing numbers of schools all over Wales are now participants in the Erasmus+ programme. This means that not only are we able to impact locally, but also nationally and internationally.  We continue to bring teachers from across Wales together to work collaboratively on exciting, demanding and highly relevant topics, but importantly they are working with partners across Europe and beyond. Erasmus+ is one of the most exciting things we have done as professionals and we are proud to be part of this global community.” Emily concludes.

Read our inspiring Outdoor Learning case study to find out about another successful Key Action 2 project from City of Cardiff Council.