Pollokshields Primary School has improved reading and writing abilities and been recognised in Parliament for the opportunities it provides to pupils.

Thanks to Erasmus+ funding, the vibrant, multi-cultural school in Glasgow worked on a literacy-based project called ‘Our Lives, Our Stories’ in partnership with Colegio Hernandez, a Spanish school in Valencia.

David Naughton, a Principal Teacher at the school, said: “The partnership, which aimed to improve literacy attainment across the two schools, was based on the idea that our literacy curriculum should take account of the cultural background of our learners. 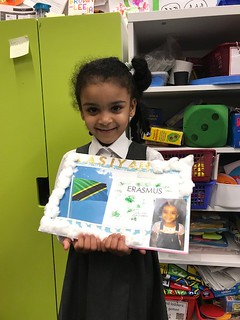 "We also wanted to give children an increased knowledge of the literary traditions of our own countries. Pupils from both schools took part in partner school visits in 2018 and 2019, which focused on storytelling and performance.

"The project has seen over 220 families across both schools creating their own family history books in an activity called 'Who do we think we are?'. The level of family engagement in this was fantastic; Pollokshields had 84% of the school roll submitting a book.

"Our teachers noticed an increased level of engagement in literacy due to the different cultural contexts that lessons were being delivered in and that this led to children producing a higher quality of work.

"Both schools then invested in new reading materials that took account of the cultural capital of our learners. These new books formed the basis of our literacy work for a term and have been used since."

As part of the project, Colegio Hernandez staff and pupils visited Pollokshields Primary in May 2018 to take part in an international storytelling festival. This involved seven other Glasgow schools, where all the children took part in cultural storytelling.

David said: “This culminated in a community-led closing ceremony held in our playground, on a glorious May afternoon, where we shared food and watched some fantastic performances from our children, along with guest of honour, local MP, Alison Thewliss.

"Alison then raised an Early Day Motion in the House of Commons to commend our work and mentioned our school in the House, where she cited our project for the opportunities it offers our pupils."

Scottish and Spanish myths and legends

Following the Spanish school’s visit to Glasgow in 2018, Pollokshields staff and pupils travelled to Spain in 2019.

"During the second year of the project, our literacy work focused on Scottish and Spanish myths and legends," said David. "This activity took place right across the school with children producing books showcasing their learning and sharing with our Spanish partners.

"Children in the upper primary stages worked on scriptwriting. They worked collaboratively with their peers in Spain and co-wrote a play featuring Scottish and Spanish myths and legends.

"In March 2019, 31 children from Pollokshields visited Colegio Hernandez to perform the play at the local town theatre." 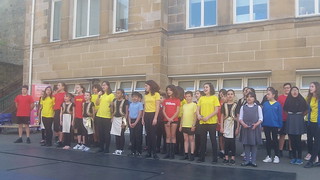 David said this was a definite highlight.

“Taking 31 children to Spain for our performance was a huge undertaking for our school, even with previous experience of taking primary children abroad. However, it helped our staff grow in confidence and we realised that there should be no barriers in our aspirations for our pupils.

"The sense of achievement our children felt and expressed as they performed a play that they had written was almost overwhelming. Our children are predominantly British Pakistani in background and whilst they have many experiences of visiting Pakistan, they had no experience of travelling in Europe.

"They spoke about their sense of pride as they stood at the end of the performance in front of the local town knowing that they had given all they could. It was pretty special!” 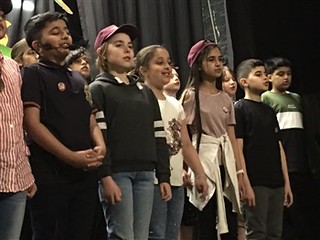 One of the best aspects of the project was the way that the children’s families became involved.

“We really enjoyed the 'Who do we think we are?' activity and it was fantastic to get such family engagement," David explained.

"Children spoke about sitting at their kitchen table in the evenings working on their books with their families and learning things about their parents, grandparents and even great grandparents.

"The children shared these stories with each other and we were delighted that parents allowed us to share these books with our school community in a dissemination event.

"One girl gasped in amazement as she learned that her mother had been born in France as her grandmother went into labour over the English Channel on a Manchester-Lahore flight. The plane had to make an emergency landing!

"There were lots of other incredible stories revealed by these books as upper stage children examined reasons for migration. Children developed a sense of pride in their origin stories and the activity certainly boosted the self-esteem of our children.

"There were so many magic moments during our project; it has had a fantastic effect on our children and staff!"

Through Erasmus+ funding, this Scottish school was able to engage pupils, families and staff in the power of storytelling, discovering their own origins and cultural history in the process.