Playing professional football is a dream come true for many young men - but it's a dream that can all too quickly turn to despair.

That was the situation Zak Guerfi and Moses Duckrell found themselves in when their respective clubs, Stevenage and Barnet, decided not to offer them contracts at the end of two-year Apprenticeship in Sporting Excellence (ASE) courses.

Both youngsters were handed a second chance, however, when they secured three-month placements on League Football Education's (LFE) 'Enhancing ASE, Progression, Personal Development and Recent Graduate Employment' project, which is supported by Erasmus+ funding.

Zak and Moses travelled to Sweden, where they were able to continue their football development as well as learning other valuable skills.

Moses trained with BK Sport, a Swedish fifth-tier club, from March to July 2015 and is now back playing in the Scandinavian country after forging a career which has also seen him play in Scotland.

Zak, who has represented Tunisia at youth level, began his placement with Bodens BK, from the fourth tier, in February 2018 and has now earned a contract with the club. 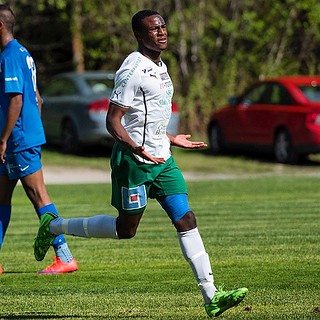 The placement programme puts a strong focus on football. Project co-ordinator Dan Jolley said: “Host clubs will put together a training programme – physical, technical and tactical development - during the week and there’ll be a games programme usually at the weekend.

"The players will also have a social and cultural programme very much trying to integrate them into the communities they go into. They might go into schools and support teachers in delivering English, as well as attending a weekly language session."

Many participants will also help club sponsors in organising and hosting events for the community.

Zak said: "The culture of football is much more suited to the way I like to play – they pass it, they work hard and the main thing that stood out for me is that everyone is so humble and kind. In England, I’m used to hearing managers scream from the sideline, but it’s not like that at all here. Everyone’s really calm. The standard of football is really good, the standard of training is great and I feel I’ve already become a better player.

"If I’m honest, I felt like I’d come to a dead-end with football in England, so coming here has completely rejuvenated me. It really has helped me massively and put me back on track and it’s exciting to see where this could take me now."

And it's not just participants' football that benefits from exposure to European training and culture.

“I love the Swedish lifestyle," said Zak. "They’re so much more relaxed and everyone is really helpful.

“I really feel I’ve developed as a person. The biggest skill I’ve learnt is independence. At home, my mum would cook my meals and do my washing. Now, obviously, I have to do all that by myself. I live in my own apartment and plan my day better.

I felt like I’d come to a dead-end with football in England, so coming here has completely rejuvenated me.

“I’ve also developed my communication skills because I’m mixing with people from different cultures and backgrounds. I’ve learnt how to talk to people and how to understand them.”

Moses agreed: “I really enjoyed it. I’m from London, which is a busy city. In Sweden I lived in a town called Eskilstuna. The way of life is calmer, there wasn’t traffic or noise pollution. I noticed the air is cleaner as well.

“I just loved the whole experience – so different to what I was used to. Sweden really became my first love.

“The setback of being released knocked my confidence and I didn’t really believe in my ability. Experiencing those three months in Sweden helped me to find confidence in myself and build character.

“I was also willing to adapt, I noticed that I was able to adapt to their style of play. The encouragement I received from the coaches and the staff around the club was immense for me.”

The experience reignited the pair's passion for football, as Zak recalled: “After getting released, I was struggling in non-league football in the UK. I honestly thought my career would come to a dead end and I was ready to quit. Coming to Sweden has been life-changing because I’ve now earned a professional contract with Bodens BK. I’ve agreed to a two-year contract with them, so I’m going to continue to live in Sweden - that shows how much I liked it out here.”

“Before the placement, I was falling out of love with football,” agreed Moses, “Afterwards, I rekindled that flame and it just helped me to propel my career forward.”

Moses initially returned to the UK after his placement, saying: “I had the opportunity to try out with Livingston FC, a top Scottish football team, and I agreed to a two-year pro-deal with them. That’s an opportunity I definitely wouldn’t have found if I had stayed in the UK.

“Going to Sweden and getting my name out there attracted attention that I also wouldn’t normally have gained. It helped me find another team out here after my time in Scotland. I’m actually in Sweden right now, playing football for Friska Viljor FC.”

The stories of these two footballers show how participants can reap the benefits of Erasmus+ participation - and they’re both keen to spread the word.

“My advice is, if you get the opportunity, do it straightaway,” Moses advised. “There are so many things you can learn from a placement and leaving your comfort zone. You gain so many different life experiences, such as learning a new culture and language in a different country.”

Zak agreed: “The best scenario is what happened to me. You get a contract and change your life, so you’re in a win-win situation.”

Are you considering taking part in an Erasmus+ funded project? Take a look at our webpage on advice and support for participants.